History of the journey through Washington

The Lewis and Clark Expedition was one of the most successful explorations in American History. President Thomas Jefferson commissioned the expedition to map the way west through the recently purchased Louisiana Territory. He instructed the Corps of Volunteers for Northwestern Discovery, as the expedition was officially named, to find a navigable passage to the Pacific Ocean.

The Expedition left its 1803-1804 winter camp near St. Louis on May 14, 1804, and proceeded up the Missouri River. In October, their flotilla reached the Mandan villages in present-day North Dakota where they spent the winter of 1804-1805. Here, the party was joined by Touissant Charbonneau, his wife Sacagawea (a Shoshoni Indian woman), and their newborn son. The corps continued its westward journey the spring of 1805. 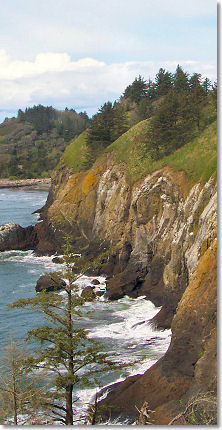 The Corps of Discovery enters Washington

On Oct. 10, 1805, the 33 member expedition entered what is now the state of Washington. As they paddled swiftly down the Snake and Columbia rivers, the explorers began to see signs that they were nearing the Pacific Coast.

On Nov. 15, 1805, the expedition reached Station Camp, the place they recorded as the "end of our voyage." From this camp, members of the expedition took side trips along the river's north bank to Cape Disappointment and broader views of the Pacific Ocean. On November 24, after deliberating about where to locate winter camp, the party decided to explore the south side of the river and eventually established winter quarters at Fort Clatsop (near present-day Astoria).

As soon as they thought the mountains would be passable in the spring, Lewis and Clark and their party left Fort Clatsop on March 23, 1806. Following the river - first traveling in canoes and then on land - the corps retraced their route up the Columbia to the mouth of the Walla Walla River. Here, American Indians informed them of an overland trail to the Snake River. By following this shortcut, they shaved many miles off the length of their return journey. The route from the Columbia River to the Snake River was one of the longest treks by land of the entire expedition.

The Corps of Discovery leaves Washington

On May 5, 1806, the Expedition departed what is now the state of Washington and proceeded eastward, eventually reaching St. Louis on Sept. 23, 1806.

The Lewis and Clark Expedition accomplished an extraordinary task under difficult circumstances. The party made many important observations related to the native peoples of the region, the geography, wildlife, plants, and geology of the American West. When you travel along the Lewis and Clark Trail in Washington, you will share the adventures of the members of the Corps of Discovery and learn more about their story.