The Corps of Discovery set up camp near present-day Stevenson at the head of the treacherous Cascades of the Columbia. Clark hiked downstream to determine the best way to get around this obstacle. During his reconnaissance on Oct. 31, he first saw 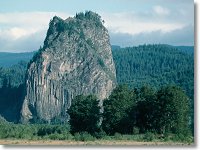 and described Beacon Rock. "A remarkable high detached rock stands in a bottom on the starboard side… about 800 feet high and 400 paces around," he wrote. Clark concluded the description by noting they called it "the beaten rock."

Here, they saw the effects of the tide, which was very good news. The presence of tidal action told them there would be no more falls or serious rapids for the rest of their journey to the ocean.

During their return trip in the spring of 1806, Lewis and Clark wrote about the rock. Clark recorded the name "Beaten Rock" in his journals in 1805, including an 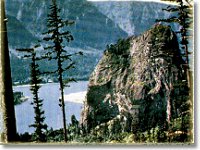 inscription on one of his meticulously drawn maps. During the eastbound trip home in the spring of 1806, they referred to the feature as "Beacon Rock."

"This remarkable rock which stands on the north shore of the river is unconnected with the hills… it has some pine or fir timber on it's northern side, the southern is a precipice of it's whole height. It rises to a very sharp point and is visible for 20 miles below on the river," wrote Lewis. 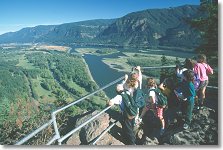 You also can hike up a trail with 53 switchbacks to the top of the rock for a spectacular view of the scenic Columbia River Gorge. Near the base of the rock, trails lead through meadows and forest or along the Columbia River.

Beacon Rock is one of the few geographic features named by Lewis and Clark that still retains its name. Many features named by American Indians and members of the Corps of Discovery were later renamed by others.