Anticipation builds as they approach the coast 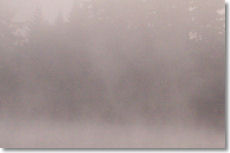 As the Corps of Discovery proceeded down the lower Columbia to the ocean, the river became much broader and the days were often cloudy and misty. At times, the fog was so thick American Indians had to guide the party through the river channels. Other times, they simply waited until the fog cleared.

On Nov. 7, 1805, the expedition reached Pillar Rock and formed a camp. Here, members of the party believed they could see the ocean. Expressing a rare moment of elation, Clark penned, "Great joy in camp, we are in view of the ocean, this great Pacific Ocean which we (have) been so long anxious to see, and the roaring or noise made by the waves breaking on the rocky shores (as I suppose) may be heard distinctly."

Although there is some question if the party could actually see the ocean from this location, they certainly knew they were close to reaching their long sought-after goal. 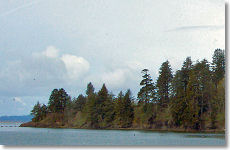 As the Corps of Discovery neared the mouth of the Columbia, they felt immense joy at the possibility of reaching their final destination - the Pacific Ocean. However, the last few miles of the lower Columbia River proved to be life-threatening. For several days, the corps was pinned against the shoreline, trying to shelter themselves from strong wind, waves, and rain. They were soaked to the bone, their clothes rotting off their backs, and many were seasick from the rolling of their canoes on the river swells.

On November 15, before setting out around Point Ellice, Clark referred to their miserable camp as "This dismal nitch where we have been confined for six days passed, without the possibility of proceeding on, returning to a better situation, or get out to hunt, scarce of provisions, and torrents of rain pouring on us all the time…"