A shortcut on the way home

On the return journey, rather than proceeding up the Columbia to the Snake River, the Corps of Discovery took the advice of American Indians who informed them that they could take a shortcut overland from the mouth of the Walla Walla River to a Nez Perce village on the Snake River. 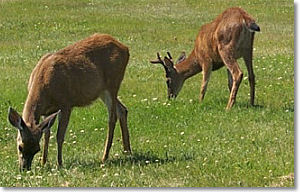 "The Indians informed us that there was a good road which passed from the Columbia opposite to this village to the entrance of the Kooskooske (Clearwater River) on the south side of Lewis's river (Snake River) they also informed us, that there were a plenty of deer and antelopes on the road, with good water and grass. We knew that a road in that direction if the country would permit would shorten our route at least 80 miles." Meriwether Lewis, April 27, 1806.