Washington State Parks is considering extensive re-development of Lake Sammamish State Park to improve recreational opportunities, restore and safeguard important natural features and functions, and develop new revenue sources to help support this and other state parks. The park's largely urbanized surroundings make balancing its recreation, conservation, and financial needs especially challenging. The essential task of this project is to create a plan that finds a balance among these important public benefits.

To assist in this effort, state parks recently formed a park advisory committee made up of local and regional elected officials, a newspaper publisher, and individuals representing tribal, environmental, business, conservation, and youth interests, and two members representing the public at large.

The Lake Sammamish Park Advisory Committee is currently evaluating a wide variety of facility proposals before recommending a short list to the commission for more thorough analysis during the next round of planning and environmental review. 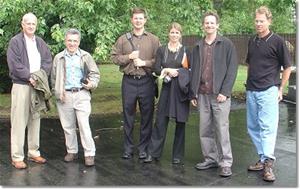 The committee selected five, from a larger list of proposals, because members either found the appearance of these facilities difficult to visualize or their imagined appearance varied widely among committee members.

The three proposals below show conceptual designs for each of the five facilities as interpreted by three highly-regarded Pacific Northwest architectural firms:

Each award-winning firm submitted designs in hopes of winning a $15,000 cash prize and a potential contract for additional architectural services during the next phase of park planning.

A fundamental purpose of this competition involves establishing an overarching architectural character for all park facilities. This character or design standard, should capture the essence of the Issaquah Community and the broader Pacific Northwest region while embracing and celebrating the park's natural landscape and features. As you look at the design concepts, which of the three firms do you think most succeeded in this regard? What particularly influenced your choice?

A necessary goal for park redevelopment is to find ways of generating new revenue to support Lake Sammamish and potentially other state parks. One way to generate revenue involves constructing unique recreational facilities and providing enhanced amenities that park visitors will pay to use. Essentially, this amounts to providing value-added public services for a fee, just like a business. Earned revenue goes first to pay for construction and operation of the facility with the balance going to support operation of the rest of the park and perhaps even other parks.

State Parks consultants, non-profit partners, and private investors proposed nine facility ideas, that according to preliminary market analysis should at least break even or generate net revenue beyond their development and operation costs. Financial and practical limitations only allowed us to explore conceptual designs for five of the nine proposals through the design competition. However, we are equally interested in your views on the remaining four ideas. Please read the narrative descriptions (PDF) of all facilities and give us your feedback on all the current proposals. Potential recreational facilities that generate revenue:

During the month of July 2004, the park advisory committee conducted a non-scientific park survey. One question asked respondents to suggest facilities not currently offered at the park that they would like to see included. These facilities are not expected to generate revenue, however their costs could be offset by the facilities that do. Please give us your reaction to these suggestions as well.

Another goal of park redevelopment is to retain the recreational opportunities currently found at the park. Of the park's approximately 512-acres, about 380-acres (75%) remain in an undeveloped, largely pastoral state including an extensive 320-acre wetland / riparian system. The remaining 130-acres (25%) include developed lawn areas, ornamental trees, sports fields, parking lots, and park facilities. We have listed significant park facilities and uses below to provide a reference for your input on new facility proposals above.