MEET BAGLEY & HIS FRIENDS
Be a Junior Ranger
Youth Programs

Meet Bagley and his friends

Bagley the beaver is named after Daniel Bagley, a pioneer who came to Washington state in a covered wagon in 1852. He had a lifelong passion for education. 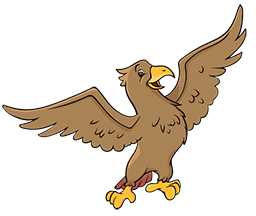 Wallace the red-tailed hawk is named after Wallace Falls State Park, which is home to a 265-foot waterfall.

Ruth the deer is named after Ruth Peeler, one of the first citizen park commissioners and mother of the Washington State Parks interpretive program. 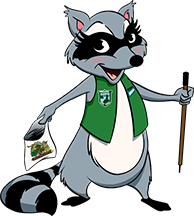 Belle the raccoon is named after Belle Reeves, the first woman Washington Secretary of State (1938-1948) and one of the first members of the Washington State Parks and Recreation Commission.

Matilda the snowshoe hare is named after Matilda Jackson who moved to Chehalis, Wash., with her husband, John R. Jackson, in the 1840s. The Jacksons were two of the first Euro-American settlers north of the Columbia River. Their reconstructed homestead cabin is preserved as the Jackson House State Park Heritage Site.

Blake the snowshoe hare is named after Blake Island State Park, a marine state park in the Puget Sound southwest of Seattle.

Lewis the Pacific chorus frog is named after Meriweather Lewis, the explorer who co-led the famous Lewis and Clark Expedition with William Clark. The expedition took place between May 1804 and September 1806 and mapped the way west from the Louisiana Territory to the Pacific Ocean.